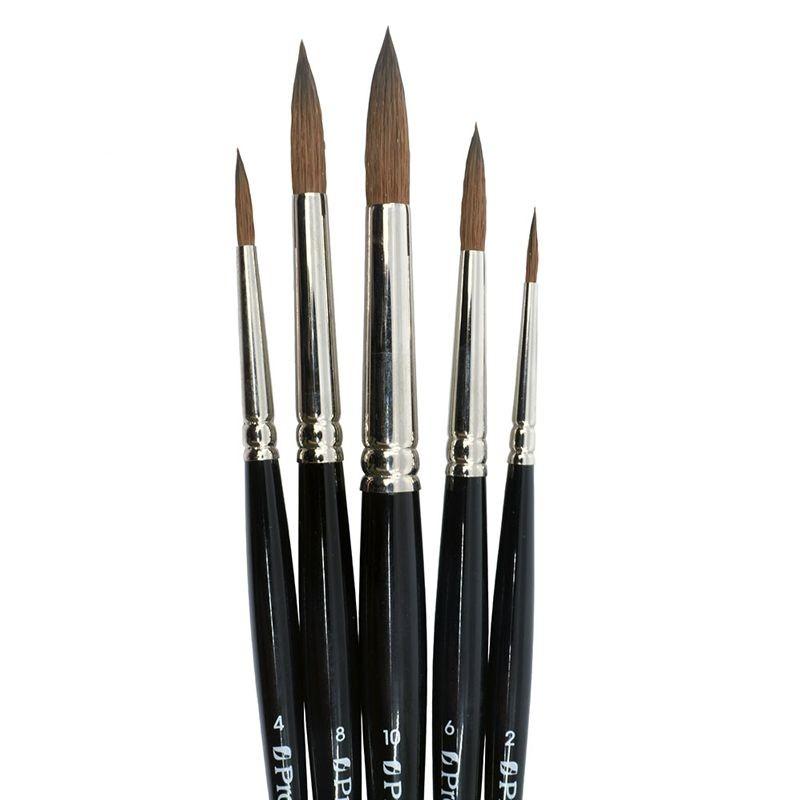 Each brush has a short black polished handle and is finished with a silver colour ferrule. They are made using the very latest synthetic technology - each brush tip is made up from carefully graded and blended synthetic hair that features twists, turns and scales that allow it to mimic the properties of natural hair.

When Pro Arte launched its ground-breaking Prolene synthetic brushes, for the very first time it created a viable alternative to expensive sables. The spring and pointing capabilities were amazing yet colour retention would never quite match that of natural hair. This was simply because synthetic filaments did not have the twists, the turns, the barbs and the belly that sable and other natural hair possess.

Technology has moved on and with modern advances new fibres have been created to mimic some of the properties that nature created. As master brush-makers, Pro Arte have taken a variety of grades and filament types and blended them into brushes that now emulate both the look and feel of pure sable like never before!

Pro Arte Sablene is a fully synthetic, vegan version of sable. It acts like sable, it looks like sable and it feels like sable. For sable lovers this is a breakthrough, for synthetic lovers these go to a new level, for animal lovers and vegans, this is utopia!

Pro Arte have been developing a synthetic alternative to sable hair and have created something better than ever before that works just the same as pure sable.  ‘Wave Synthetics’ creates spaces between the fibres to hold more water and gives softness but still retains spring and point."

Using a mixture of grades and thickness, this has been developed further to create something which is barely distinguishable from the real thing – Pro Arte Sablene Synthetic Sable.

Genuine pleased with these brushes. Hold colour really well and are pretty darn close to real sable. They have good spring back snd hold their shape.